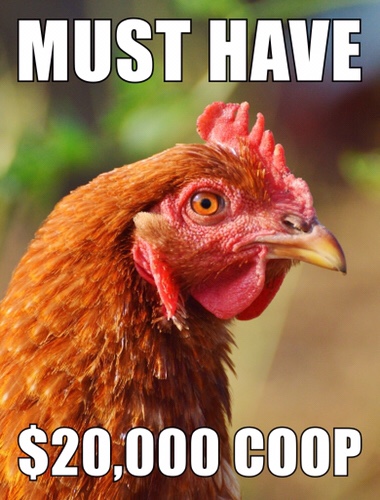 According to the Washington Post, chickens are the new cool thing to have in Silicon Valley. If you have chickens, don’t get excited, you’re not cool enough to hang with this group. These chickens live in matching mansions, have chicken whisperers come whisper to them, and the food; I want to be one of these chickens. They are fed organic salmon, watermelon, and steak. Steak! All for premier eggs.Two Door Sports Car Coupe or Four Door Coop

As I was studying on these luxury chickens, I thought about money. I probably wouldn’t think twice about high income folks driving a fancy car, but fancy chickens, chicken houses, et al, just rub me funny. I can’t imagine the need for spending $20,000 on a chicken coop. I just can’t do the math on that. Possibly I’m also offended at the reference of sitting and watching the chickens being called “hillbilly television.”

This is not about the haves and the have nots, but rather another indication of the disconnect between consumers and food, between farmers and food. While owning backyard chickens and collecting your own eggs should bring everyone closer together, with expectations like this, we only push ourselves further apart.